YouTube responded with an error: The request cannot be completed because you have exceeded your <a href="/youtube/v3/getting-started#quota">quota</a>. 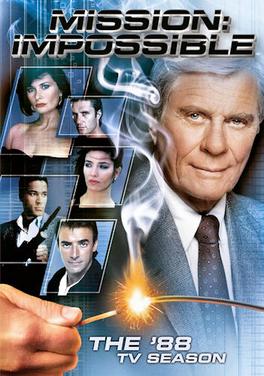 is an American television series that chronicles the missions of a team of secret American government agents known as the Impossible Missions Force (IMF). The show is a revival of the 1966 TV series of the same name. The only actor to return for the series as a regular cast member was Peter Graves who played Jim Phelps, although two other cast members from the original series (Greg Morris and Lynda Day George) returned as guest stars. The only other regular cast member (unseen) to return for every episode was the voice of “The Tape” (in this series, “The Disc”), Bob Johnson.

The events of the series take place 15 years after the last season of the original Mission: Impossible TV series. After his protégé and successor as leader of the top-secret Impossible Missions Force is killed, Jim Phelps is called out of retirement and asked to form a new IMF team and track down the assassin.

His team consists of Nicholas Black, a disguise expert and actor; Max Harte, a strongman; Casey Randall, a model-turned-agent; and Grant Collier, the son of Barney Collier, the IMF’s original technology expert, and a technical genius in his own right. After finding the killer, Jim decides to stay on and keep the team together. Midway through season 1, Casey is killed during a mission (becoming the first ongoing IMF agent to be disavowed), and Secret Service agent Shannon Reed succeeds her for the remainder of the series. With the exception of this cast change, Phelps’ team remains constant throughout the series.

In 1988, the American fall television season was hampered by a writers’ strike that prevented the commissioning of new scripts. Producers, anxious to provide new product for viewers but with the prospect of a lengthy strike, went into the vaults for previously written material. Star Trek: The Next Generation, for example, used scripts written for an aborted Star Trek series proposed for the 1970s.[citation needed] The ABC network decided to launch a new Mission: Impossible series, with a mostly new cast (except for Peter Graves, who would return as Phelps), but using scripts from the original series, suitably updated. To save even more on production costs, the series was filmed in Australia; the first season in Queensland, and the second season of episodes in Melbourne. Costs were, at that time, some 20 percent lower in Australia compared with Hollywood. The new Mission: Impossible was one of the first American commercial network programs to be filmed in Australia. The show’s core cast included several Australian actors, and numerous Australians (along with Australian-based American and British actors) were cast in guest-starring roles, too.

According to Patrick White’s book, The Complete Mission Impossible Dossier, the original plan was for the series to be an actual remake/reimaginging of the original series, with the new cast playing the same characters from the original series: Rollin Hand, Cinnamon Carter, et al. Just before filming began, White writes, the decision was made to rework the characters so that they were now original creations, albeit still patterned after the originals, with only Jim Phelps remaining unchanged, and with the Collier character becoming the son of the original to take advantage of the fact the actor cast in the role, Phil Morris, is the son of Greg Morris, the actor who played Barney Collier. One of the reworked scripts incorporated a guest appearance by the elder Morris as Barney Collier.

The strike ultimately ended and the series was able to compose original storylines; ultimately only a couple of episodes ended up being outright remakes of the original series, including the show’s premiere episode.